I have started trying to write this post on many occasions, and I keep getting stuck and it never gets finished, but today I am going to try again as its something that I have really been battling with over the last year, but I finally feel like the tide is turning. 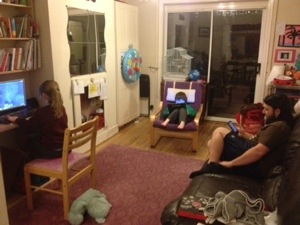 I do feel like I am making some progress,  like I am beginning to win the never ending screen time war, and have finally managed to get to a point where the kids know I’m not joking when I tell them they have reached their limit and they have to turn it off.

Over the last few weeks we have finally established some very clear limits, and although the kids think I am being mean I know it will be well worth it in the end.

For a while they fought against it and complained that they were bored, my reply was “Great that’s exactly what I wanted, now go and play with your toys, or read your books, or use your imaginations, or draw or paint or make something.”

When I was a kid there was lots of time to be bored, which meant that there was also lots of time to be creative and generally get into trouble. If we were lucky there was about 1.5 hours a day of kids TV programming and Saturday morning TV was a major treat. But if you missed it you missed it and for most of the rest of the time there wasn’t really anything on TV to entertain kids. Although I do remember watching lots of documentaries and quiz shows with my dad. I loved QED and blue planet, and I think some of my love for science was born at that time.

There were also no other electronic screens to move onto when the TV was off. No computer, no phone, no ipad and very few trips to the cinema.

I can’t even imagine what it must be like to be a child with a brain that is developing now here in the 21st century when there is never ever the need to be bored. Our kids can literally be entertained 24 hours a day by a wide variety of electronic games, gadgets and screens, there is endless variety, and they are portable, in the car, in the church, in the shops there is literally nowhere where a child cannot sit and play with an electronic device.

For as long as I can remember I have been working deliberately to reduce (or more accurately to stem  the increase in) the hours that our kids spend using screens. It is super hard, I mean its like a never ending battle like shovelling snow in a blizzard and its one war that I never though I would be fighting. Over the last year since I have been reading more about sensory integration, and neuro-development it has become clear to me that no matter how hard this battle is it is one which I must keep on fighting.

Recently I met a mother who said that she had been told that because her son had autism that she should allow him to use the ipad whenever he wanted for as long as he wanted, because it was calming and a good way for him to zone out when the world became too stressful. Whilst I whole heartedly agree that this is a great reason to use an ipad, and it can be very helpful for when our kids need a distraction when things are stressful, I really couldn’t think of anything worse than completely unlimited use.

If I let my kids do this then they would literally spend all day every day attached to the device. They dont even have to come off it to eat or use the bathroom, I have even had requests from the to be able to watch films on it while they have a bath….Errm NO!

I have to say that the ipad has been a God send for us when Charlie cant cope with so much sensory input, a long noisy church service or a family meal in a restaurant, but to allow him to have unlimited use of it just seems like madness.

Often Charlie wakes up and literally the first words out of his mouth are “I haven’t had any screen time yet, can I have the ipad now?” I have heard lots of “it’s not fair” and “we are the only kids who cant have…” But they are slowly accepting the rules and things are changing some mornings now Charlie even wakes up and asks for toys.

When they get home from school they know that they can have only one hour on their choice of screen, and there are rules about having homework done first and no screens during meal times.

I was taking a call from my manager when they arrived home tonight and I was so proud of them when no one asked for a screen and this is how I found them when I finished the call. Their cousin was visiting and Lillie had even managed to offer to help her with her reading homework.

One thought on “The endless battle of screen time”

our team learning and support space

As part of ASI WISE, the Sensory Project is a community of practice, for practice

The life and times of Miss Isabella Burgess, the brightest light in our lives. Oh and she has down syndrome...

Supporting churches to include people with Autism and Learning Disabilties

Life through the eyes of a female with Aspergers

My life as a lawyer and mom of a 6 year old with autism..

Aiming for a long, healthy, happy life - one habit at a time.

Living on the Spectrum: The Connor Chronicles

Our family's adventures in the world of ADHD and Autism.

Simply my take on living life as a female with Asperger's Syndrome.

My life with Autism

Autism Dad and Son and their adventures!

Supporting parents of disabled children to stay in work

Solutions for Parents and Families of Sensory Kids

Life on the margins

Yes, Dorothy, it really does. It positively SPARKLES!